Is It Too Late For Adoption?

Jackie called us one evening, and spoke quietly into the phone.  As a single mother, her private moments to speak on the phone were few but she needed help.  As she began to share her story, the emotion in her voice built.

"I should have called you years ago.  I looked at your website when I was pregnant, but I just wasn't strong enough to call.  My son is four years old now and I just can't keep on trying to make ends meet on my own.  Is it too late to put my child up for adoption?" After talking a little more together, I discovered that her son's father had never been involved but her friends and family had encouraged her to parent.

"I remember my friends being so excited.  We were still in High School and they thought it would be so much fun to have a new baby.  They threw me a shower and were so sweet when I was in the hospital.  But now I don't see them much. It's almost like they moved on with their lives and left me here.  They like my Instagram pics of my son and say how cute he is, but I don't see them.  I called one to ask about babysitting a few months ago so I could go to the doctor and she was too busy."

"My mom was great help when he was a baby, but then when my little sister got pregnant, she said she needed to focus on her. I guess that is how it is.  I had talked to a couple people about adoption when I was pregnant, but all of them, even my mom, said 'Oh no, you don't want to do that. I'll help you.'  But here I am, four years later, and I feel so alone."

We talked a little more about what her hopes and dreams were for her son and for herself.  Jackie shared that she just really believed he needed a family where he could have a dad, and where life was more than spending so much time in daycare, only to come home, take a bath, and go to bed.

"I work all day and am exhausted when I get home.  Sometimes I feel like I barely know him.  We snuggle and I try to do stuff with him on my days off, but that's usually when I have to get groceries and stuff.  He just deserves so much more. And I think I do too.  I'm just afraid it's too late to put my child up for adoption," she said, as she broke into quiet sobs.

It is never too late to consider adoption for a young child.  You can still choose the family, choose the type of contact you want, and work directly to create a plan that works for you and your child.  You are in control and Lifetime can help you create a custom adoption plan. We provide free counseling for you as you consider this decision and can give you some suggestions on how to share your decision with others in your life.

If you are considering starting adoption for a child you are already parenting, call today to learn more about adoption for an older child: 1-800-923-6784.  All calls are private and confidential, and our caring adoption coordinators are happy to listen and help in your unique situation.

Jackie moved forward, making an adoption plan for four-year-old Henry.  She choose two different families and spoke with both of them.  One of them traveled to her town to spend a few days getting to know she and Henry, and it was a match made in heaven. The adoptive dad and Henry swam in the hotel pool together for hours. Watching them, Jackie realized that this was what Henry needed -- two parents that weren't exhausted and could make her son a priority.

Today, they stay in touch frequently via text, and Jackie has enrolled in classes at her local community college. She hopes to become a nurse.  "I really want Henry to be proud of me," she recently shared with me.  "I don't ever want him to think that I don't love him.  It hurts to not have him here, but I know he is having the life that he deserves."

If you or someone you know is struggling to parent a young child, learn more about the adoption options that Lifetime has for placing an older child for adoption. 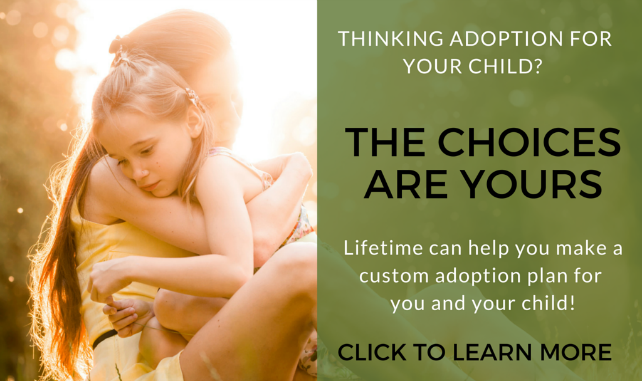