"I Gave My Baby Up for Adoption: Here's Why…"

Have you ever wondered, "how could someone just give their baby up for adoption?" To help answer this question, we wanted to share the story of one woman who chose adoption for her baby. By reading her adoption story, you’ll be able to see things from her point-of-view and discover some of the reasons why women choose adoption:

“When I found out I was pregnant, I was in my senior year of college. It was from a one night stand, and I'm embarrassed to say that I had no idea of where the guy was. I'd already had a daughter when I was 16 and my mom was caring for her. When I told my mom I was pregnant again, she said that there was no way she'd be able to raise two grandchildren. And, I didn’t have any other family that could help out. So, my first thought when I discovered I was pregnant was to have an abortion.

I went to the crisis pregnancy center the next town over so I could sign up to get an abortion. When I was at the pregnancy center, they let me know about a pregnancy choice I hadn’t thought about: adoption. They also educated me on what happens during an abortion. Once I learned what it meant to have an abortion, I knew I just couldn’t do it. But I wasn’t equipped or able to become a parent, yet, either. So I decided that adoption was the best choice for both me and my baby.

I called Lifetime Adoption when I was 22 weeks along; I had just found out that my baby was going to be a boy. They mailed me profiles of hopeful adoptive families and some info on adoption. One couple really stood apart from the rest: David and Alicia. They lived in the Midwest, too, and had the same family values that I was raised with. They even lived on a farm like I grew up on! We talked on the phone, and I was able to tell them what drew me to them.

During the whole adoption process, Lifetime gave me caring, one-on-one support. My adoption coordinator was always there when I needed her, even the time I called her at 3am freaking out that my son would hate me one day! She reassured me that with open adoption, he'd know why I chose adoption: out of love. Also, open adoption meant that I could be in touch with my child and the adoptive couple throughout the years. David and Alicia agreed to send me updates on my baby as he grew, and we’d meet up in person once a year at the local county fair.

Once my son was born, I cherished the time I spent with him in the hospital, caring for him. But, he just didn’t feel like “my baby” (I don’t know, it’s hard to explain). I asked David and Alicia to stay at the hospital so that they could bond with him and spend time with him too. It was soo hard to say goodbye to my son, but I saw my adoption plan through and placed him up for adoption. A few months after I graduated from college, I got a paid internship in my career field. Then a year later, I moved to a nice apartment and was finally able to parent my now six-year-old daughter.

I have a great open adoption relationship with David and Alicia, the adoptive family I chose. I love seeing how well my birth son is doing with them! I’m so glad I did adoption, because it gave such a gift to two people who couldn’t have children. And, most important of all, it gave my son a better life than I was able to give him. I’ve seen him in person three times now and he’s getting to know me. He’s such a happy little boy: always smiling. I know I did the right thing in choosing adoption!” 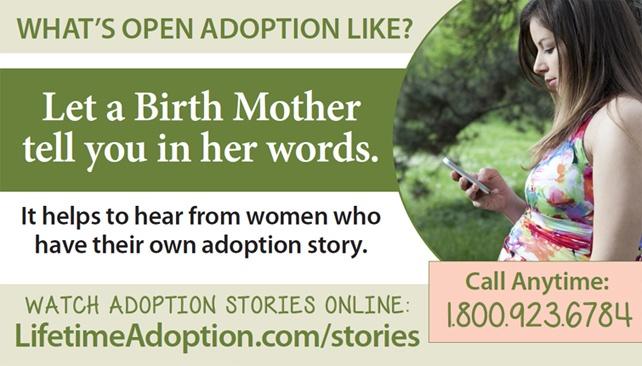