Making Your Adoption Profiles | What Makes You Unique?

Making Your Adoption Profiles | What Makes You Unique?

For nearly 30 years, I’ve made it my life’s mission to connect hopeful adoptive couples with birth parents in order to fulfill their dreams of parenthood. An imperative piece of your journey to adopt a baby is your adoption profile. The adoption profile is bound booklet about you and your spouse: inside are photos and info about topics such as what you do for a living, where you live, your hobbies, your promises to your child’s birth parents, and reference letters from family and friends. You’ll want to stand out from other waiting adoptive couples, while at the same time presenting your authentic self. The following adoption tip about how to find what makes you unique was excerpted my most recent adoption book, Called to Adoption.

“Mona and Dan lived in the High Desert of Nevada with their son, Jake, who was four years old. They had adopted him through a state agency two years before and wanted to adopt again, so they called me.

Full-figured with her short, strawberry blonde hair, Mona was outgoing and had a great smile. Dan was slender and handsome but, unlike his wife, was quiet and shy. Both were in their early thirties. Dan worked as a mechanic; Mona was a stay-at-home mom.

Our adoption center started reviewing on their profile. One photograph showed them standing with Jake in front of their neat doublewide modular home, surrounded by sand, sagebrush, and cactus. I got to know them pretty well. They lived a simple and unhurried life centered on their home and family. They rarely went on vacation trips, and their extended family consisted of some friends who lived hundreds of miles away.

Mona and Dan worried that their profile wouldn’t stack up to those they’d seen of other adopting parents who had college degrees, a lot of money, big houses and lawns, grandparents nearby, and Hawaiian vacations planned.
I asked Dan if there was anything special about Mona.

“There is one thing,” he said. “She’s famous for her chocolate chip cookies. They’re made from a secret recipe.”
In the profile, we wrote that her cookies were the “best around those parts.” One month later, Mona and Dan were chosen by a pregnant birth mother named Sarah, who told me that the cookies were the thing that had first appealed to her. She imagined her child coming home from school to chocolate chip cookies fresh from the oven, then climbing into Mona’s soft lap to cuddle.

Around the office, Mona is remembered as our Chocolate Chip Cookie Mom. And I’ve got to tell you, hers were the best cookies I ever tasted, though she never would give me the recipe.”

Are you dreaming about adopting a baby or child? Take the first step today and begin researching domestic adoption. Lifetime Adoption's website has an Adoption Support section which contains an abundance of information about adoption: 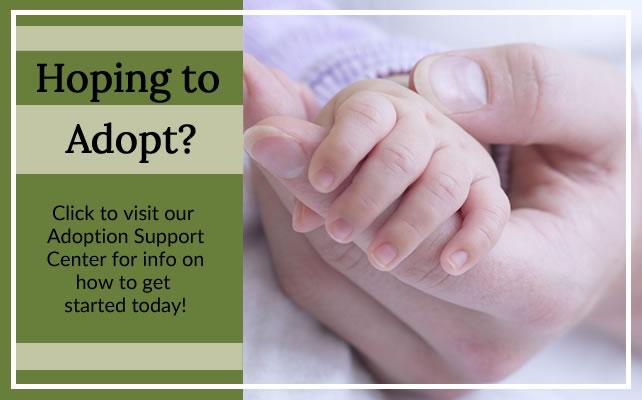